An Exploration into the History of Anchorage 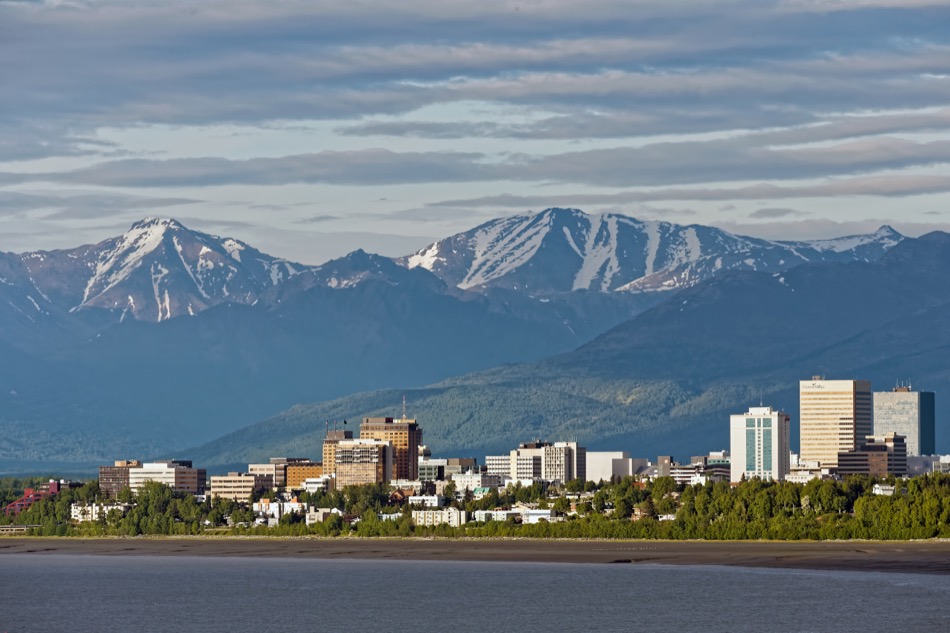 With its humble beginnings as a lush wilderness, it is a wonder that Anchorage has become Alaska's most populated cityscape. Over 291,000 people proudly call the city proper home with nearly 400,000 more along the outskirts. The trek from dense wilderness to populated city occurred over 100 years and included many twists and turns along the way. With a look at the history of the region, it is easy to see how the wilderness turned into ‘The City of Lights and Flowers' in such a short time.

Long before the United States of America took an interest in Alaska, people lived off the forested land. They arrived in Alaska by the Bering Land Bridge between 20,000 to 40,000 years ago. These populations did not develop the land, but instead lived in groups that traveled around the region as needed to survive. Different groups of Alaskan natives lived all across the land, with the groups along the coast near modern-day Anchorage known as the Dena'ina Athabascans.

Modern explorers did not flow into this region until the mid-1700s. Both European and Russian explorers discovered the area around Anchorage for the first time around 1741. In 1778, Captain James Cook of the British Royal Navy made landfall and intended to perform a claiming ceremony. The Russian explorers had previously done the same, renaming the Dena'ina Athabascan's land ‘Point Possession.'

US Purchases Alaska from Russia

William H. Seward signed the Russian treaty, which allowed the U.S. to purchase Alaska for $7.2 million. Only 400 people moved into the trading stations being set up across Cook Inlet. However, with the 1890s discovery of gold, people started flocking to the territory, setting up camp and eventually settling in for good. By this time, the US had started setting up the civil government, assigning judges, clerks, marshals, and even a governor to the region.

As people poured into the region in search of gold, settlers started to build long-term settlements along Cook Inlet. More than 13,000 people arrived in Cook Inlet by 1898, though many returned home or went off to Klondike in search of the big score.

During this time, the U.S. continued to make Alaska a part of its union, establishing an elected legislature in 1912. This also opened the doors for the railroad commission to start exploring the possibility of establishing railways through the territory.

The passing of the Alaska Railroad Act in 1914 lead to the construction of the railway to the area that would become Anchorage, leaving Knik abandoned. Along the edges of present-day Anchorage, a Tent City was built to house all the railway workers and merchants.

By 1915, the U.S. Post Office Department dubbed the region, “Anchorage,” replacing Ship Creek as the main township in the region. Anchorage did not become an official town for quite some time after and there was even a vote on the official name. Some of the options included Terminal, Winalaska, and Gateway. It was the Post Office that made the final determination, however, leaving the name as Anchorage.

Start of Community Events and Services

With its official name, Anchorage received a Chamber of Commerce, which was tasked with improving the region. Kimball's Dry Goods opened soon after and remained a part of the town until 2002 when they closed their doors. The original building still stands today, however, as the only surviving commercial location from those early days of development.

Other important community organizations began as well, including the Anchorage Woman's Club, which focused on improvements in the civic and cultural space. The community continued to expand and grow with the development of public schools, movie theaters, and docks along the ocean.

By 1919, Anchorage was a bustling town with both people and supplies carried by the quick-moving railroad and ocean vessels. After all this growth, the city was officially incorporated in 1920 with a population of 1,856, as railroad workers and members of the military returned home.

The population experienced slow growth from 1920 to 1929 when Aviation Field was developed. Eventually becoming Merrill Field, this airport allowed for faster travel between locations, bringing more people to the region. By 1930, more than 2,200 people lived in Anchorage.

In 1939, President Franklin D. Roosevelt earmarked over 50,000 acres of land for a military base through an executive order. Fort Richardson was transformed into Elmendorf Field soon after. Military infantry and officials came pouring into the region as a result, bumping up population numbers from 3,400 to 6,000 in 1942. Population growth steadily continued, resulting in more than 11,000 people living there by 1950.

In 1964, the Great Alaska Earthquake destroyed much of the downtown area of Anchorage. The rebuilding process happened rapidly, facilitated by the discovery of oil under much of the land. Oil companies came from far and wide, boosting the popularity of the region by far. Within just 10 years, the city had more than 174,000 people living there, which is half of today's population. Growth continued undisrupted through the decades with the cityscape becoming more modern by the moment.

Today, more than 40 percent of Alaska's population resides within the city of Anchorage, and the population continues to grow as well. The beautiful landscape, strong community connections, and rich history of the region keep people coming from far and wide to have a taste of ‘The City of Lights and Flowers.'